I remember the year 2008 when I visited the Games Convention in Leipzig. 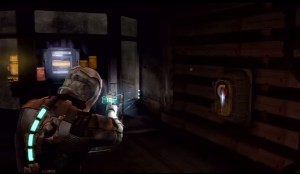 There was this one game that really impressed me with its heads-up display. I’ve never seen such a HUD in a video game before. The extraordinary thing about this HUD was that there was no HUD. It was Dead Space. A science-fiction horror survival shooter you might have heard of. If not, you should definitely grab a copy. Visceral Games, the creators of Dead Space, made an awesome job by integrating all information the player needs into the actual world of the game. No icons, no text, nothing is seen in any corner of the screen when you play the game. It’s hard to do a better job when it comes to immersion. When I grabbed the controller and looked at the screen I was hooked from the very first second. Of course the question arises how the player knows how many hitpoints he has left or if he needs to reload. You know that all the time. You just have to look at your character’s suit. A filled pipe on Isaac’s (the main character in Dead Space) suit demonstrates his life. When you aim with your gun, a hologram above it shows the current ammunition. It’s just perfect for games of that kind. 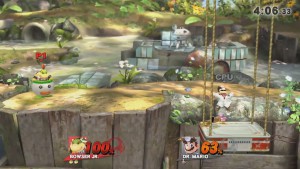 Well, Super Snow Fight is not a game of that kind. When I thought about the heads-up display in Super Snow Fight, games like Super Smash Bros or Mario Kart came into my mind. You see a portrait of you character somewhere on the screen. Next to this image you can see your hitpoints, your snowballs and your current power up. Smash Brothers by default shows every player information on the bottom of the screen. In Mario Kart you can see your power up in the corner of the screen. This works pretty well. So I thought, I can use this style for Super Snow Fight. I tried it with the bottom. It didn’t work. What about the corners? Did not work either. I was surprised. Playing the game with a heads-up display like that is less fun and you even might get angry at some point. Why? Because you don’t have the time to look away from your character or your target. Well, maybe I am too slow, but then I am not the only one. When I had to look away from my character, I noticed how fast the action of the game actually is. You need to know your hitpoints, your ammo, your power up and everything about your opponent immediately. As soon as you look away from the action on the screen, you can’t aim or move or decide when to use your power up. It’s not even a second, but that’s enough time to get hit by another player or, what’s even worse, lose focus. When you get distracted you’re an easy target, your aiming gets worse and you get frustrated. In a very short while you’ll stop playing and won’t come back. A nightmare. Crazy how important a well-designed HUD really is. 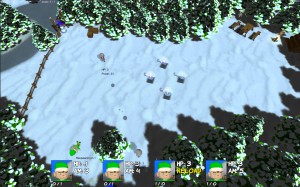 The solution is a HUD that is attached to the player’s character. Health and ammunition is below your character and the power ups are items above the character or a particle effect somewhere attached to it. To this date there are only three power ups implemented. When you pick one up, you see its corresponding model above your character’s head. Using the power up starts a little particle effect. This way everyone knows what’s going on with your little guy. Also everyone knows how many hitpoints and ammo you have left. And when you are reloading, i.e. grabbing some snowballs, your character bends down. So animations can also provide enough information. Things you don’t usually think about when you play a game, but you definitely have to think about when you design one by yourself. 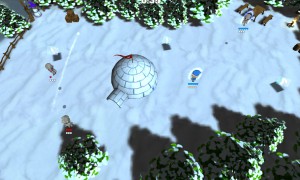 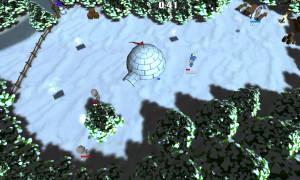 Of course this solution is nothing new. You can see a health bar on every unit in every real-time strategy game. Every role-playing game has particle effects to show the characters buffs or debuffs. And even Mario Kart shows power ups or special weapons on the driver, e.g. a banana peel attached to the kart. Thinking about and designing the heads-up display just reminded me of the ways video games are made. There are no rules. Nothing is carved in stone. You can mix features and designs of any genre, and that’s simply amazing.