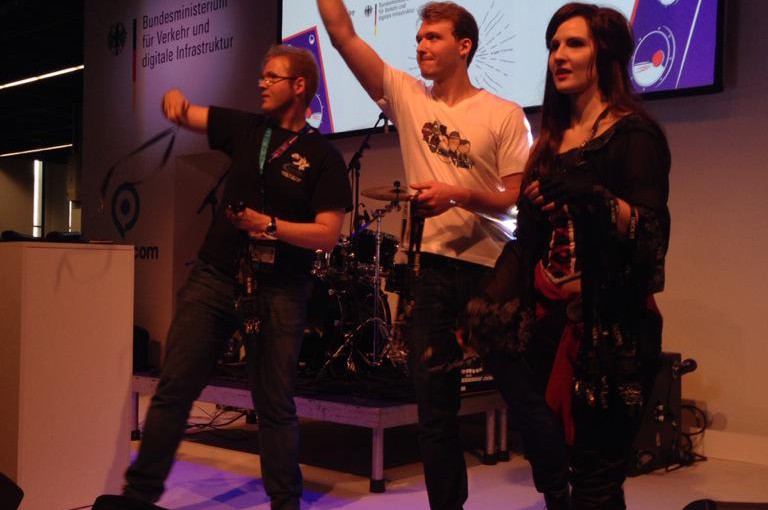 In 2005 I went to the Games Convention in Leipzig for the very first time. Ten years later I’m at Gamescom in Cologne. But this time I’m on the other side. I’m presenting my own game – Super Snow Fight. This is pretty crazy and a long-held dream coming true.

The development of Super Snow Fight started around Christmas 2014. I had this idea of spicing up a snowball fight with some serious action like grenades, missiles, magic and stuff. So I began to download Unity and coded a little prototype. It was fun, so I continued. Then I discovered some really nice assets in the Unity Asset Store which I bought so that the prototype looked and sounded sweet. In February 2015 I watched an interview with Jan Klose (Deck 13 Interactive, Lords of the Fallen) saying that he wanted to support independent game developers. Well, I thought, I’m making a game in my spare-time, so I’m kind of an indie dev. Let’s give it a try and send these guys from Deck 13 a message. The rest is history. They liked the game and now we are partners. I develop the game, they do marketing and publishing. And that’s how I got to Gamescom. It was a crazy trip and with this blog post I want to give you an impression and some tips that might help you to make the most of such an event.

Book a hotel room
I am so glad I did this. It’s a two hour drive from my place to Cologne. At first I thought I would commute every day. But it really was the right decision to book a hotel room. It was a little bit hard to find a hotel close to the fair one month before Gamescom, so next time I will definitely do this earlier. And boy was I happy when I just had to walk for a few minutes to the hotel because, in the evening, you are completely exhausted. Furthermore you can have a shower and go back to the city to enjoy a nice dinner with the people you’ve met that day. Or you can go to one of the many Gamescom parties. Maybe that’s not the best idea if you want to stay awake the next day, but if you don’t have a hotel room, you can’t do any of these things.

Print business cards
I love business cards. But I really love cool business cards! When presenting my own game I got the chance to design my own business cards and have them printed. It was one of the best decisions to bring them. People want your card! I put them in front of the screen so everyone could grab one or I could grab some quickly and give them to the people I’ve just met. I gave away 100-150 cards. That’s just awesome! It’s fun to give people your card, it’s great to get their cards and you dramatically increase the chance of being remembered.

Print T-shirts for yourself
As an indie you usually can’t afford a lot of merchandise. But it’s nice to have a unique look so everyone knows what you do. That’s why I decided to print shirts with the logo of Super Snow Fight for the three days just for me. Even when I went to lunch people looked at the shirt and asked what Super Snow Fight was. So, even in the break, you can make new connections. And that’s why you are at Gamescom in the first place.

Bring Sweets
Sweets aren’t that expensive and most of the people were happy to get one or two. You don’t need to brand them. Some guys saw an Ice Fresh candy, grabbed it, and then asked what game I have. Sweets definitely work.

Prepare the elevator pitch
You need a description of your game that fits into 30 seconds. It may happen that you meet people you always wanted to meet, but they have less than a minute for you. You know, at Gamescom everyone is pretty busy. So if you want to share your game with them, prepare that short pitch. And even better, have some business cards in your pocket you can grab immediately. This happened to me; I’m very thankful for this opportunity and now I’m just waiting to see if this moment will lead to anything. I did my best.

Five minute description
We had a 12sqm booth which was crowded at times. Lots of people wanted to see the games and, if they have to wait too long, they will leave eventually. You don’t want that to happen, do you? So you have to describe, show and play your game in 5 minutes. Prepare for that! Do it at home, review your text in your mind in the car, on the train, in bed, wherever, but do it! Some topics you can cover:

For instance, here’s my text (more or less): Super Snow Fight is a local-multiplayer-action-brawler or classical couch co-op game for up to four players, but you can also play alone against the AI. You play a snowball fight, and in addition to snowballs, you also have a bunch of power-ups like grenades, missiles, magic stuff and so on. [That’s where I asked if the people would like to play the game and they always do! So I handed them the controllers.] Okay, we’ll play a free for all deathmatch. Here you can choose one of more than 30 characters [I explained the difference between manual and auto aim], now we have four arenas to choose from. With every arena more power-ups will be unlocked. Let’s start with the park arena. [Now I explained the controls, so that the player can immediately see what happens when she presses a certain button. When the controls were clear, we played one or two matches against the AI and then the five minutes were over. While playing against the AI, I talked about the development of the game, e.g. that it’s made in Unity, I programmed the stuff by myself, got the assets from the Unity Asset Store, and of course, when and where the game will be released.]

A presentation onstage
Now this is crazy. On the first day of Gamescom I was told that I would have to give a presentation onstage in two days. What?! Well, that’s great, but also a bit frightening. It would have been easy if I could have simply played the current build of the game onstage, but unfortunately that was not possible. Just a projector and sound, but no machine we could play the game on. Fortunately we had a laptop with us. So in the evening I was able to prepare a little presentation with screenshots and the trailer at the end. You can watch it on YouTube (in German):

Bring a laptop
You see, you never know what’s going to happen. If you have a laptop and/or a usb drive with a build of your game, screenshots, the latest trailer and so on, then you are prepared for most situations. You can show the game to others whenever you need to.

Take notes
You meet lots of people and you get lots of business cards. But after three or more exhausting days you cannot remember every name, face or conversation. What you really should do is make notes after a conversation. Write down anything that will remind you of that person. It would be a shame if someone really likes your game and wants to write about it, but then you forget to send them a beta-key.

Bring a friend
Developing a game all by yourself can be hard. Presenting it at a convention is definitely hard. If you are in the lucky position to have a supportive spouse or friend, pay for a hotel room and food for her and bring her! You will be so thankful and it makes things much more enjoyable. Gamescom was a big thing for me in my life and it’s just amazing that I was able to share it.

Live healthy
I know it sounds cheesy, but sleep well, eat healthily and work out or go for a walk from time to time. You have to stand all day and being a little fit makes this much easier.

What now? As soon as you have recovered, the next steps are to write to all the people that were interested in your game. Always keep in mind that they saw lots and lots of other games, too. To keep your game in their minds it helps to send them an e-mail a few days after the fair. If they are still interested and even want a beta-key, give them one!

I hope this article helps you a bit to prepare for your stay at the next fair or convention. If you have any further questions feel free to follow me on Twitter: @_PatrickGod
If you are interested in the game I’m talking about all the time, please have a look here: www.supersnowfight.com

Also I want to thank all the people I met and of course the great team of the indie booth of Deck 13: @Deck13_de @Gametology_dev @klonkgames @RadicalFishGame @RumpusAnimation
Check out their games!